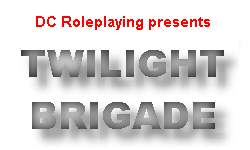 Donna a.k.a. Donna:
- Daughter of Aquaman and Wonder Woman from an alternate future
- Home City: Unknown Nemesis: People who don't like Mommy
Transported from an alternate future by unknown forces, Donna knows nothing of her life other than that Midnight is her "Mommy." Now that the secret of her biological parentage has been revealed, Aquaman currently retains custody of Donna until Midnight is found worthy.

Spiral a.k.a. ??
- Super-speedster with a heart condition that requires him to have a pacemaker
- Home: Kenya Nemesis: Dr. Polaris
Spiral was placed with the Twilight Brigade on special assignment by Lex Luthor. Died while using his super-speed to save an innocent after Dr. Polaris EMPed his pacemaker.

And, as a special feature, the first member of the Twilight Brigade's Rogues Gallery - The Atom!

Discovered to be a traitor to the JLA in the alternate future, The Atom almost succeeded in destroying the Twilight Brigade before they were able to return to their own time and repair the timeline.