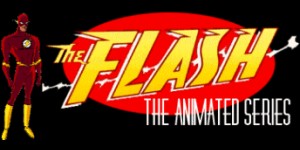 Based on the new Warner Brothers animated series by those gods Bruce Timm and Paul Dini, check out these new figures! They are in perfect scale with all previously released Batman and Superman animated series figures! Cool! Bring on the rest of the JLA!

Lightning Strike Flash with Lightning Projector
Hooray! We get a regular Flash in the first assortment! Unlike Batman Beyond...

Evil Abra-Kadabra with card trick launcher
We managed to talk the Hasbro rep into taking off Abra-Kadabra's accessory for the second picture. Another CustomCon exclusive!

Artic Racer Flash with jet powered racing skis
It's the first series and we're already getting variant figures. At least this one is some-what "canon" since Flash used skis in the episode "Frost Bitten." (They look suspiciously like TNBA skis to me...)

Blue Streak Flash with blue streak racer
The wings fold back and the missile even fires. Can anyone say "Street Luge Batman?"

Captain Cold with icicle blaster and cold gun
Check out the "real" cold gun below!

All in all, this is a pretty cool wave! I can't wait for the next one! All we need are more villians in the next wave! Howabout a Professor Zoom or a Weather Wizard?

We "got" this from Hasbro's press kit. Could this be wave 2?