Hasbro has listened to the G.I. Joe collectors! Hasbro still has decided not to bring back the forever popular 3 3/4" figures, but they let Lego do it! CustomCon 2000 brings you all the pictures and info!

Here is a close up of General Hawk, Storm Shadow, and Cobra Commander.

Here is a close up of Destro, Snake Eyes, and Baroness. 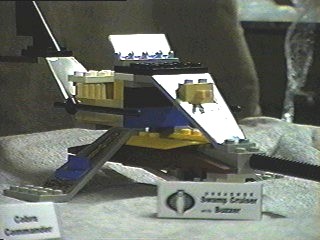 Here a few shots of the only G.I. Joe/Cobra vehicle on display! It is the Dreadnok Swamp Cruiser. The Buzzer figure was not available, but a stand-in was used!

This line looks very promising and before it has even reached stores has many fans craving them! G.I. Joe Legos look to be very fun!