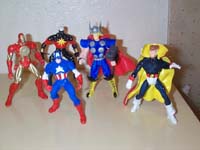 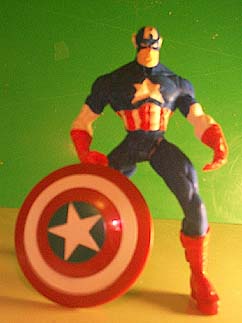 Captain America comes with his shield.

Here's a close-up of Captain Marvel. 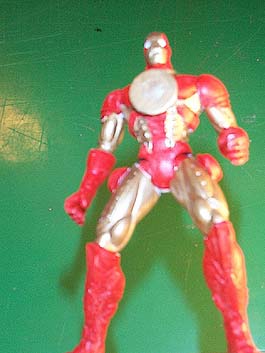 Here's Count Nefaria. There will be a varient of this figure.

Here's Thor, with his hammer.

One of our representatives at CustomCon actually managed to get an interview about these figures.

Two other people were in the showroom, Don Drake, who actually looks official, and Jack Jorgins, who doesn't.

Andrew: The style of these figures screams Hasbro, but these are Marvel characters, normally covered by Toy Biz. Which company is behind these figures?

Drake: We're Hasbro. What happened is, we were looking through some of the old Kenner records, when we came across a note saying the DC rights had been reacquired from Toy Biz. We sent our lawyers to talk to their lawyers, and it was decided that since they had done a line of our characters,, we should be able to do a line of theirs. They bought it.

Andrew: Why the Avengers?

Drake: We thought long and hard about doing the X-Men, but decided there are already too many Wolverine figures out there. Besides, once the movie comes out this summer, the Avengers are going to be the biggest thing anywhere.

Andrew: The Avengers aren't getting a movie.

Andrew: The X-Men movie comes out this summer.

Drake: Why those lying little--(at this point he storms out in an explosion of barely coherent ranting)

Andrew: So, Jack, you were the head designer for this line. Where's Spider-Man?

Jorgins: From the start, this was going to be a Spidey line, with Avengers and Avengers villains in the supporting roles. We even had a whole storyline to wrap the line around, but at the last minute we were told to drop a figure from the assortment. He'll be back for wave two.

Andrew: I have to say that these are some very distinctive figures. What was your inspiration?

Jorgins: I was told to base this line on any existing Hasbro property, and I chose ... well ...

Andrew: Was it Total Justice?

Jorgins: (loudly) No. Mummies Alive. I love the way those figures were sculpted, they look ready to leap into action. (much softer) Yeah, but that's off the record, okay?

Andrew: Sure. What made you decide to choose the characters you did?

Jorgins: Well, we knew we were going to use the big three alongside Spidey--which obviously didn't work out--and Marvel, who's getting a lot of attention right now with his new book.

Andrew: What about accessories?

Jorgins: We're going with what's appropriate to the characters. That was important to all of us on the creative end of things, even though Drake wanted snap-on armor like in the cartoon. Thor has his hammer, Cap has his shield--it's not here because we couldn't get him to stand when holding it. We've also got some nice variants planned: silver Iron Man, Cap with energy shield, non-powered up Marvel, and a few others we're not allowed to talk about yet.

Andrew: How are the variants being shipped?

Jorgins: There will be one variant per case, but there's going to be no way to tell which case holds which variants.

Andrew: And finally, what's planned for the future?

Jorgins: We'll be doing more classic Avengers, some more recent villains, and Spider-Man, as long as this line sells well.