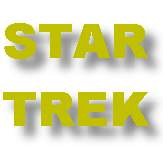 2000 marks Playmates' return to producing Star Trek action figures for wide distribution. After showing their other 15 figures, they had 5 new 5" figures on display today. For this new assortment, they have chosen to stick very closely with the two most successful Trek eras -- the original cast movies and the Next Generation series.

The Trek figures, oddly enough, were displayed in a Enterprise 1701-D Bridge Playset. When asked if this signaled a reissue of the popular playet, the representative had no comment. One thing is for sure -- the odd display made taking pictures challenging, so no detailed pictures of individual figures could be taken.

The Antidean was featured in the Next Generation episode "Manhunt." Useless bit of knowledge #1 -- Mick Fleetwood played this alien.

The Pakled were featured in the Next Generation episode "Samaritan Snare."

Commander Uhura and Captain Spock were featured in numerous episodes and movies, but only in these particular uniforms from ST:II to ST:VI.