On that fateful day in the offices at Playmates, the decree came down. Star Trek was deader than that little Taco Bell dog the day after his contract ended and he went into the deep fryer. The audience for Teenage Mutant Ninja Turtles had moved on to more adolescent pursuits. And only geeks were buying Simpsons toys.

To save the company, they needed a white knight. They needed a hero. So they dug through the old licenses.

And they found one.

Walt Disney Corp, in conjunction with Playmates toys is proud to re-present...

The Darkwing Duck Line from Playmates is scheduled to ship this fall in conjunction with the film from New Line Cinema. 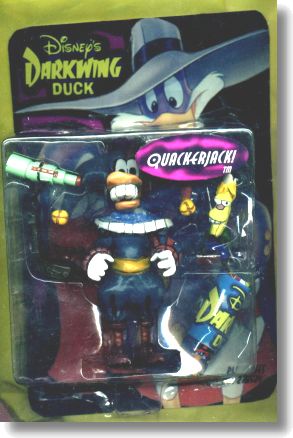