After their Planetary wave of figures, DC Direct will be releasing another line, known for some reason as Series O. It's figures include Batman Beyond, Catwoman, Iron Monro, Clayface 4, Sterling Silversmith and J.J. Thunder and his Thunderbolt.

All of the DC Direct Series O figures were made by Steve Orlando. 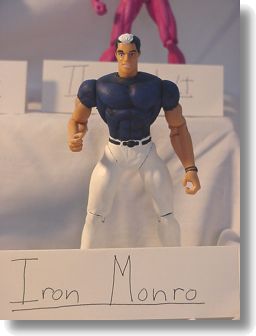 Iron here is simply a repaint of a Mission Impossible Ethan Hunt. I used extensive drybrushing to get the "ripped" effect of this 1940's super-man. 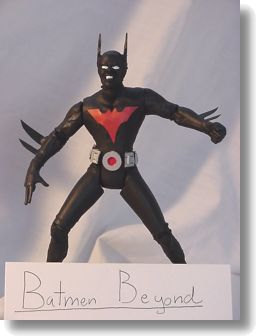 Batman Beyond was made from a XMen Evolution Cyclops figure. The adventure was removing the head. I found as I cut it off that it had metal inside, as sparks flew from the figure, good times... Anyway I sanded all the detail off the figure and primed him. His arm blades are cut bubble plastic. His belt is made from a cut up TNBA accessory and a metal washer. His head is a Metal Gear Solid Vulcan Raven, which was used because I love BB's mask's ability to show so much emotion. The ears where cut form hard plastic. I used hot glue to make them even with the head. I am really pleased with this guy. 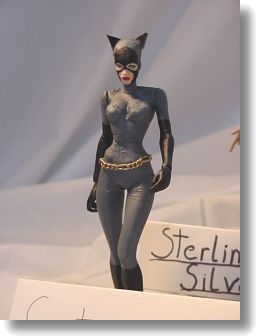 Catwoman is a repaint of my Void figure, Catwoman was made from a sanded Danger Girl Sydney Savage with a heavily sanded Danger girl Natalia Kassle head. I painted her appropriately after adding Ears made form a TNBA cape, and a belt made out of an old necklace. Pretty nice for a figure that was made from a custom I almost threw out I hated it so much. 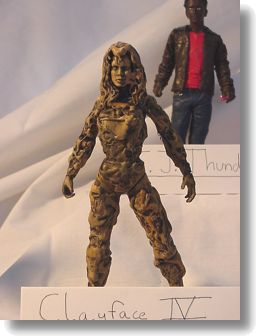 Clayface 4 was made from a WWF Titantron Live Tori figure. As with my other Clayface, I covered her in hot glue to give the clay affect. I then painted her flat black, and drybrushed on brown, flesh, tan, and beige in that order. I then went over that in a Flesh/Orange colored wash. I then went over certain areas with a black wash. That's all folks. 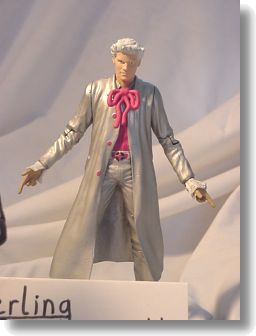 Sterling is a repaint of a Buffy Angel figure. I cut off his hands and gave his those of Austin Powers (gotta love those puffy wrist thingees). His neck tie thing is from a DC 7in Joker. I did this figure just because I have never covered a figure in so much silver paint before, and well I thought it would be fun. 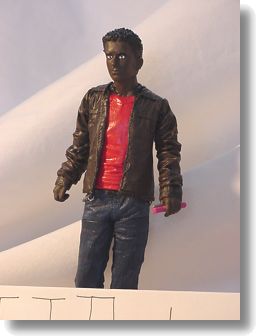 JJ was made from an Austin Powers Scott Evil. I kept the hair as I thought it to be more trendy and if JJ is anything he is trendy. I also went with the 15 year old JJ instead of the young kid pictured in recent issues of JSA. His pen is made from a cut PickUp Stick, and the metal clip on his pen is a cut paper clip. Other than that he is a repaint.

T-Bolt is a DC 7in superman blue. I filled in the etched lines with quick tite and painted him flat bla...pink (sorry, I was think of the wrong figure) I then drybrushed on lighter and lighter shades of the pink color to finish him. Oh yeah, his forehead bolts are made from cut bubble plastic. Thank God they made him pink again, a purple thunderbolt is just wrong.