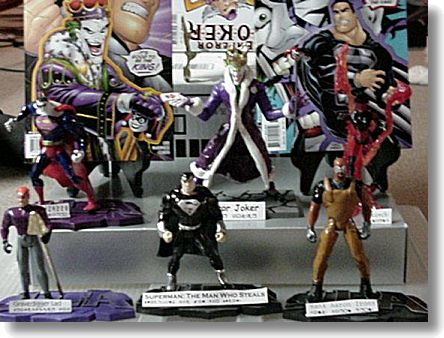 When "Emperor Joker" appeared in the Superman books, in was an instant hit. So Hasbro got fast to work on figures. Due to numerous delays and losing the Bat-license, it was canceled. Then, one day, an employee who was looking through the closet at the Hasbro building for something to repaint into a new, exciting (and as-yet-unannounced) action figure, he came across a box labeled "Emperor: Joker." He opened it, found the prototypes, and was able to convince the powers that be at both DC and Hasbro to release these figures. Now, at long last, is the almost-missing Emperor Joker wave.

Every figure comes complete with a voice chip, which is waterproof to reenact the multiple water scenes from the comic! Voices are done by Tim Daly (Superman, Bizarro), Mark Hammil (Emperor Joker), Perri Gillpan (Scorch), Michael Dorn (Hank Aaron Irons), all of whom voiced characters from the Superman and Batman animated series! A note about the labels: The lower portion is the name of the figure translated into the moment when Emperor Joker reinvented the alphabet, and will be featured on the figures' cards to show the Joker's control over this toy line. 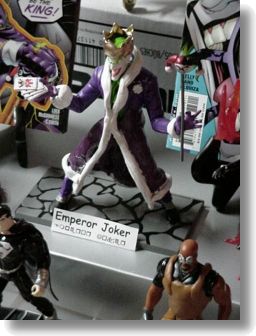 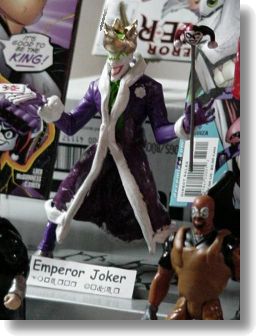 First up is the man behind the madness, Emperor Joker. He comes complete with a Harley Quinn staff. Rumor has it that he will come in a two-pack with Babe-In-Waiting Harley Quinn. Hasbro reportedly wanted to do Dolphin-Loving Joker (with the "HONK IF YOU LOVE DOLPHINS" T-shirt), but DC thankfully rejected it (see what happens when two companies work together?). Emperor Joker comes with a voice chip that says numerous phrases (they were able to get more in thanks to his size), such as: "What part of 'Joker is God' don't you understand?" and "That's it! I could give 'em a whole amalgam of new headaches. Hit 'em right in the zero hour! Make it a real crisis for those infantile jerks!" and "This isn't the beginning of the end! This is the END of the beginning!"

Next is Superman: The Man Who Steals. Superman will come with a WANTED poster and a voice chip that says, "I WILL BE FREE!"

Bizarro #1 is also included in this assortment. He'll come complete with the "Bizarro #1" necklace, "Bizarro 4: The Quest for War" video, and a voice chip that says, "Bizarro #1 is the weakest there is!"

Scorch provides another member of the Joker League of Anarchy. She'll come with a flame base, and a voice chip that says, "Right behind you--you gorgeous hunk of--whatever you are!

Hank Aaron Irons is here as well! He'll come with his trademark spiral glasses, the Steel statue, and a voice chip that says, "There IS more to life than--than just--nonsense, isn't there? Things are NOT right in the world, are they?"

Gravedigger Lad gives Bizarro and ever-faithful sidekick. He'll come with his trusty shovel that WILL say "Property of Gravedigger Lad, Bizarro's worst enemy." And worry not! "Gravedigger Lad" will be written across his sweatshirt! He'll also come with a voice chip that says, "Gee, bein' Bizarro's pal and gettin' to take care of the Graveyard of Solitude. How'd I get so lucky?"

Both Hasbro and DC say that if this wave is successful, more will come. Both companies are so sure, sketches are drawn and some are even taking mold! Plans are to make a figure of EVERY character in the story. Wave 2 should include: Ignition, Mr. Mxyzptlk, Fishface, Wonder Woman, The Flab, the Martian Manhunter, Plastic Man, and the Yellow Paper Lantern! The heroes-turned-villains will come with their counterparts from the regular DCU. The good news here is that Hasbro will create BRAND NEW sculpts for all of those, with EVEN MORE points of articulation!

Playsets are also in the works, something that hasn't been seen lately. The Hall of Jerkos (with exclusive Arkham Superboy), Superbugerboy restaurant (with exclusive Mr. Guardian figure), The Graveyard of Solitude (with a resculpted Bizarro to match Ed McGuiness's design), and The Emperor's Ha-Hacienda (with exclusive Lois Lane in the clown getup). Four-packs are also planned: Arkham Superman, Steel, Superburgerboy, and Supergirl; Aunty Better-Than-We-Are, Niece Matrix, Uncle Oswald, Niece Lucy; The JLA: Skizm, Bounty, Enigma, and Gorgeous Gilly. All in all, this is looking to be a super couple of years for Hasbro, DC, and the fans!