To celebrate the 5th anniversary of Kingdom Come, DC has already announced, "An Emerald Kingdom", a miniseries that takes place roughly 3 years before Kingdom Come events, and introduces the KC era Green Lantern Corps in a story that put them face to face with a new, though familiar, evil menace from deep space. To make things even better, the miniseries release will be supported with a whole line of action figures featuring the new GL Corps, as well as some of their allies and enemies! Now, let's see the figures:

This is Kyle Rayner, the new corps founder and natural leader, he's the bearer of the only power ring without any limitations (yellow color, 24 hours charge, wood). He is married to Jade in this story but they don't have an easy relationship since Kyle ordered Jade to stay on earth under Alan Scott's command.

Max Gardner is the son of Guy Gardner and, since the death of his father, the sole heir to the throne of the New Vuldarian empire that protect a vast sector of the galaxy. Kyle made him a GL when he came to earth searching for help from his father's old allies, to stop the forces of Sinner Star, the evil space conqueror. 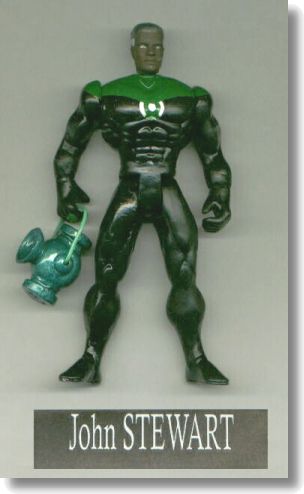 John Stewart is Kyle's second in command and one of the last surviving members of the original corps.

An old friend of Kyle, Connor Hawke is actually the "official" Green Arrow of the Kingdom Come era (since Ollie Queen don't use the name any more). Kyle gave him a ring when Connor offered to go with him to outer space.

Alan Scott, the original GL has forged his lantern into armor, and is now the designated protector of earth. From his throne in the New Oa space station he waits for any sign of extraterrestrial threats and for the return of Kyle and the corps from their space voyage.

This is The Green Guardian, a clone of Appa Ali Apsa, one of the Guardians of the Universe that organized the original GL corps.

After leaving The Titans, Argent became Kyle Rayner's sidekick. Now, she combines her own silver plasma powers with the GL emerald energy as a member of the new corps.

One of the newest recruits, Sodam Yat, is known as the "ultimate Green Lantern"; that's because he is a daxamite (and a big daxamite by the way), which means that, apart of a GL ring, he has powers similar to the ones of a kryptonian.

Jade, the daughter of the original GL, and wife of Kyle Rayner regained her powers when Ganthet, the last Guardian of the Universe, "recharged" her with some of his own energy. Since her bad relationship with her father and husband, she has reclaimed Earth's surface ( her father don't go there anymore) as her personal protectorate.

This is Carol Ferris, former lover of Hal Jordan and host of the Star Sapphire, queen of the Zamarons, now she's a Corps member and the channeler of a mysterious dead GL ghost.

After reaching his redemption as The Spectre, Hal Jordan spirit felt somethig really bad was happening, and one more time, he returned to the living plane through the only person that really understood him, his former lover Carol Ferris.

Sinner Star, an entity of pure evil, a conqueror of thousands of worlds and killer of Guy Gardner.

A second wave is already in the making and will possibly include "Emerald Spirit translucent Hal Jordan", "Warrior King Guy Gardner", "Torquemada", and the "New Oa" and "Mogo, the living planet green lantern" playsets.