Superman's base is a "Knight Glider Batman" figure. The lower arms were removed, as was the head. The belt was sanded off and the chest was modified and smoothed over with Kneaditite. The lower arms were recast from a "Tornado Force Superman" from the Euro-release Animated line. The head is recast from the "City Camo Superman" figure, which is also an Euro-only release. The belt is cut painted paper, the boot tops are Kneaditite, and the symbol is courtesy of IRON COW Productions. The cape comes from a "Capture Net Superman" figure.

Green Lantern was made from a "Tech Shield Nightwing" figure. He had been planned for quite some time but was not going to be made until a closed fist and a way to make his arm rotate could be found. This problem was solved when the JLA Superman was made. To begin Nightwing's hair was removed and sanded and chest details were sanded off as well. Then the right hand was removed at the wrist and then the "Tornado Force Superman" lower right arm was recast up to the sleeve line and was removed at the fist. The fist was attached at the wrist line and then details were added with Kneaditite including a detailed GL ring. Once the Kneaditite dried the right arm was removed at the elbow and a 1/18 hole was drilled into both the detached wrist and the upper arm in the center of each. A post made from a "Heat Scan Batman" accessory was inserted in the wrist hole and then the wrist/post was placed inside the elbow post allowing for a swiveling/rotating action. The lantern is made from Kneaditite, Plumbing supplies, and the same Heat Scan Batman accessory. The lantern has glow-in-the-dark nail polish in either side to create the effect of energy coming from it. The ring also has a tiny bead of glow-in-the-dark nail polish in it to create an energy effect.

Lex Luthor is based on Bill Burn's recipe with one slight alteration. The look of Lex sans jacket was inspired from his appearance in "World's Finest" where Lex is seen casually sitting in his office reading the daily planet after Superman saves the president. The vest, ring and tiepin are all Kneaditite. The head comes from an Animated Superman Lex, which has been repainted to give him a rich tan.

Orion is made from a TNBA Batman torso, with Undercover Wayne legs. The head comes from a motorcycle two pack Batman and some cut plastic. Belt and gauntlets are sculpey.

Flash is made from a Speed Racer Racer X with a sanded down TNBA Batman head. Everything else is sculpey and plastic. 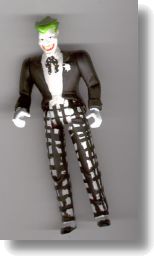 Joker is a repaint of a MM2 Joker.