This is an animated line of figures featuring one of the most beloved sidekicks of all times. This company is dedicated to accurate reproductions of the characters related to Robin whether from the comics (primarily the incarnations of The Batman Adventures) or from the various incarnations of the Batman animated television series. Like the old Hasbro license, these figures feature only the basic five points of articulation and are in scale with the now defunct Hasbro line in hopes of helping children (and collectors!) round out their Gotham villages. The first wave is an eclectic mix of the television series and the comics. 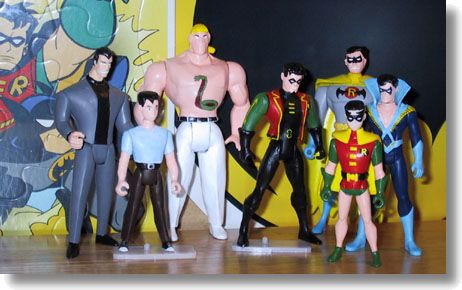 Robin's nemesis in the early incarnations of his own comic, King Snake is shown here ready to throw Robin out of the nest.

Irritated with Bruce and determined to strike out on his own, Dick nevertheless carries the dark and grim demeanor of his mentor here. The figure is in his semi-casual duds as in the last incarnation of the Batman animated series. The head is a prototype, however, and one of the sculptors from the line insisted that the smile and the look of the face will change before the figure is mass produced.

Just what every Robin fan needs -- a Tim Drake from the last incarnation of the animated Batman series. Tim is shown here in his everyday duds. One of the sculptors was at the convention and insisted that kids will buy any "kid" action figure -- and an action figure that looks just like them can serve many purposes. (In fact, he told an amusing story about how his son had been playing with a prototype in the office and within twenty minutes young Tim had been kidnapped, rescued, run away from home and locked Batman out of the Batmobile. When his sculptor dad pointed out the computerized nature of the Batmobile, his son replied, "Yeah, but Tim knows all the codes and he hacked Batman out 'cause Alfred was mad at him, too." We're not sure exactly what that means, except that Batsy had best be nice to this young protégé.)

Rumors are flying that there will be a Zucco and possibly even a young Jim Gordon in a later wave of this line. This figure again shows the company's commitment to making figures as they appeared in the show rather than in neon colors that the characters would never have worn. Dick's hat is removable and just as oversized as in the episode itself.

This new company claims to have had several problems with their mold manufacturer. This head was supposed to be a production head, but the mold was flawed and none of the few production pieces made will be making their way to the stores. The sculptor we talked to was relieved since it will give him some much needed time to resculpt the cape (in order to add the high "collar" it needs). The company has said this piece may come in later shipments due to the problem with the head.

This Robin is from an Elseworlds comic, rendered in the animated line.

Here's the Robin everyone remembers and no one knows exactly why he didn't ever show up like this in the television series. This version is based on his first appearance in 1940.

Another figure that most DC Universe people remember well, but has never seen plastic: the Marv Wolfman era Nightwing. Dick costume is meticulously reproduced and supposedly the anticipated production problems with the paint job never did come to pass. (Now if they'll just branch out from the Robin figures and make the Teen Titans, too!)

Heading back to Haley's circus where Dick grew up, Dick once again dons a costume and takes to the trapeeze. It's interesting to note how the basic costume design is similar to the one he wore in "Robin's Reckoning," but with some significant color changes. I guess Dick wanted to really distance himself from the old costume (and possible comparisons to the Robin costume).