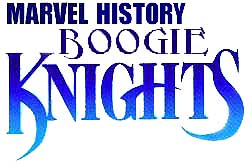 LUKE CAGE, POWER MAN: Wrongly convicted and sentenced to prison - reborn in a freak experiment there that gave him steel-hard skin and strength beyond belief - a man who hides his identity as an escaped convict in the role of a HERO FOR HIRE!

MANTIS: Thanks to her training by the Priests of Pama, Mantis has complete control over her body, thus endowing her with an empathic nature as well extraordinary mastery of alien martial arts. Her time served in the company of the Mighty Avengers was excellent preparation for her future as - the CELESTIAL MADONNA!

MASTER OF KUNG FU: "Call me SHANG-CHI, as my father did, when he raised me and molded my mind and my body in the vacuum of his Honan, China retreat. Since then I have learned that my father is Dr. Fu Manchu, the most insidiously evil man on earth . . . and that to honor him would bring nothing but dishonor to the meaning of my name - the RISING AND ADVANCING OF SPIRIT!"

HOWARD THE DUCK: From the time of his hatching he was . . . different. A potentially brilliant scholar who dreaded the structured environment of school, he educated himself in the streets, taking whatever work was available, formulating his philosophy of self from what he learned of the world around him. And then the Cosmic Axis shifted . . . and that world changed. Suddenly, he was stranded in a universe he could not fathom. Without warning, he became a strange fowl in an even stranger land. TRAPPED IN A WORLD HE NEVER MADE!