Reign of the Supermen (Animated)

After the Video/DVD success of Batman Beyond: Return of the Joker Warner Brothers has announced their next straight to video animated feature effort will be "Superman: The Reign of the Supermen," as a follow up to last years Superman: The Animated Series season 4 story arc "The Death of Superman." 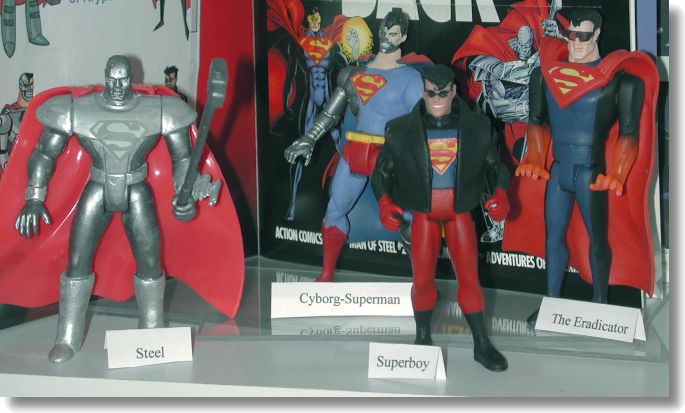 Hasbro can't get away with a line of repaints this time, because the 4 main characters have never been seen as figures before! So we get 5 new figures for what should be an incredible collaboration/reunion between Bruce Timm and Paul Dini.

Steel- John Henry Irons was the last person to see Superman alive. As Superman saved him from a collapsing building, some sort of energy was exchanged. Did Superman know he was about to die and choose his successor? 5 points of articulation. Comes with hammer.

Superboy- The only Superman Clone to survive Project Cadmus' experiment. "Born" as Superman died. But is he "faster than a speeding bullet." 5 points of articulation. Comes with removable jacket.

The Eradicator-Cold, calculating and Kryptonian? Can this be the Man of Steel? 6 points of articulation. Comes with Fortress of Solitude Mini bot.

The Cyborg-With his steely gaze looking down on you and questionable tactics you wonder, even with his Kryptonian DNA and built of a metal not found on Earth, can this really be the Man of Steel returned? 6 points of articulation. Comes with small bag of ashes of Coast City.

Lois Lane-Even though she puts on her game face and smiles, you can see by her clinched fist that there is pain right below the surface. Long sought after by fans and collectors we FINALLY have a figure of everyone's favorite reporter for the Daily Planet is available. Lois had 4 pints of articulation and comes with Superman's torn cape.