Surprisingly enough, this summer Hasbro is releasing one more wave of Superman: Man of Steel figures before they completely lose the DC license. This final wave consists of 9 different figures, including one with a vehicle.

The figures include many characters from the Superman comics as they look currently in the comic books, and one figure from a few years back.

First up is the Trickster as he appeared recently in the Superman titles. He does not look nearly as goofy as he used to, but has a more streamlined look.

Next is Superboy with his current look, including a new jacket and costume, as well as slicked back hair. 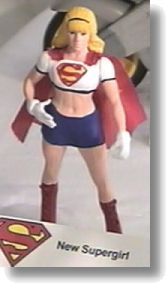 Supergirl is now sporting the same look that she has had on Superman the Animated series. This Supergirl also features a cloth cape.

Riot has been both in the Superman and Supergirl titles, and makes a striking action figure, looking just as demented as he does in the comics. 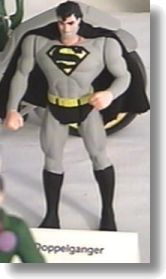 The one figure that is not from a recent comic is Doppleganger. Superman fans who have been around for a few years know that this was the form Supergirl took awhile back. She had an identity crisis and thought that she was the true Superman.

Adversary is another recent character from the Superman titles. He is an aptly named enemy of Superman, a psychic manifestation of Cary, who also has a figure in this line.

Thorn comes with a motorcycle which is apparently a redeco of the Superboy cycle that originally appeared in the Superman: Man of Steel line. 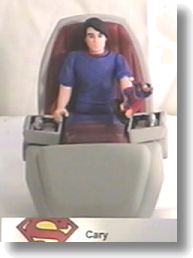 Cary, the young boy who controls Adversary, comes in his Brainiac-enhanced wheelchair, and with his own Superman action figure.

Finally, we have Steel in his new armor. He sports a goatee as well as a removable Hammer. He appears to be a modified version of the original SMOS Steel figure.

All in all, this line is something to look forward to, one last hurrah from Hasbro before they totally stop producing DC figures.