'Many Faces' is a brand new line from Buffy.fan Inc. Based on the best selling novels, the 'Anita Blake - Vampire Hunter' series, three toy companies are combining their efforts to produce this brand new assortment. We met with Laurell K. Hamilton, author of the books, to tell us more about this bold new product.

Cool Collecting.com: Firstly, can you introduce the world of Anita for us? What are these books all about?

LKH: It's just like the world we all live in - except that the creatures of the night - vampires, werewolves, zombies and such - are not the stuff of fiction. They are here-and-now. We co-exist with them - not always happily, not always peacefully. And sometimes we get to know them all too well.

CC: Sounds exciting. Now, tell us about the figures. We understand it's several companies together? Could you explain that a bit?

LKH: Sure. I don't own a toy company, obviously (I'm a writer, not a toy maker) but I know a lot of people wanted Anita toys. I'm really not the person to talk to on this. Buffy.fan - who's coordinating this project, managed to get a number of companies to agree to help us out, he did this whole 'coordinated attack' strategy on various different message boards, and in the end, he won, so we're ending up with a great, diverse toy line.

CC: Good for him then! The power of persuasion obviously works! Let's get down to the figures? How many are you producing?

LKH: Wave one consists of 5. We hope to do more in the future, Buffy.fan is working on it I believe.

CC: We'll be looking forward to them! Let's have a look at the toys then. 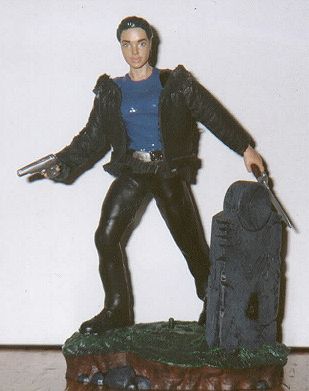 LKH: Certainly. These first two are my favorite. They're made by Playmates (the company behind Tomb raider, Simpsons, and the old Star Trek stuff). The first is our normal, standard Anita. She has a removable cloth jacket, and even has her arm covered in scars! They've paid so much attention to detail on her - even down to the shoes I describe in the books! The companion piece to this one is 'Business Anita' she's wearing an office outfit, one I described in The Lunatic Café if I remember correctly. I'm so delighted with her; even her accessories are perfect, right down to the little penguin mug! Buffy.fan tells me the mugs are going to be a feature of the lines, after two or three waves, we're going to have a huge collection of Anita's mugs! 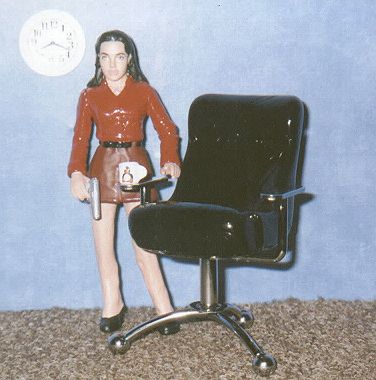 CC: The next one is our favorite; she looks like she's from an animated series. That true?

LKH: Yes, as it happens. Bruce Timm and the guys behind the Batman TV show have been great. They're working on an Anita cartoon right now. It's going to be more for children, but it'll still be great. This figure is from the show. She represents Anita in the middle of an animation.

LKH: Thanks. Hasbro is putting out these animated figures, along with a line of miniatures. I think we put mini-Anita in the first wave. You can se her standing by the gravestone. She's a cute one.

CC: We see you've joined the ranks of the licensed properties of Lego!! Tell us a bit about that.

LKH: Oh yeah, this is great. Lego approached us actually, they were really excited about the 'many faces' project, and wanted in. They're putting out a set of Anita Legos. We've included this preview version in our first wave. They're going to be great. Buffy.fan is coordinating with Lego at the minute to make some playsets, and loads of together characters too - you should look out for them to arrive this fall hopefully. 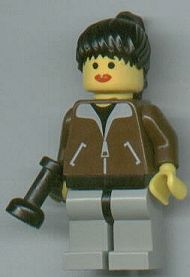 So, we survived our interview without being shot, or maimed or anything. We really can't wait for these figures. Rumor has it that Art Asylum and Moore Action Collectibles are clamoring to be involved in wave two! We can just see MAC's take on Anita, Dene Mason could do a great job after his past beauties like Magdalena and Faith! Look out for wave one, hitting Custom City (home of Buffy.fan Inc.) very soon!