This DC: The Dark Side line is by Justice Freak.

The Mighty Isis: The base figure used was a DC Direct Hawkgirl. Sculpey was used to make the headband, amulets, neck-piece and earring. The gauntlets, and the skirt and boots were also created from Sculpey. The figure was painted with acrylic paints and sealed with and acrylic sealant.

Robin: In order to customized this figure a DC Direct Aqualad figure was used. The legs needed to be smooth from where Aqualad boots were. This was done using Sculpey. Also created from Sculpey were the Robin's boots, glove fins, belt buckle, sleeves, and mask. The collar part of the figure's cape was also made from Sculpey. The rest of the cape cape from a JLA Steel figure. The figure was painted with acrylic paints and sealed with and acrylic sealant.

Batgirl: A DC Direct Wondergirl was used as the base for this custom. Some of the hair had to be carved away. Then the head was smoothed with Sculpey and the Bat ears were also made from Sculpey. The heals on the boots were also trimmed down to help the figure stand on its own. The belt, gloves and boots were made from Sculpey as well as the Bat-Emblem. The Cape came from JLA Batman II (4th wave). The figure was painted with acrylic paints and sealed with and acrylic sealant. 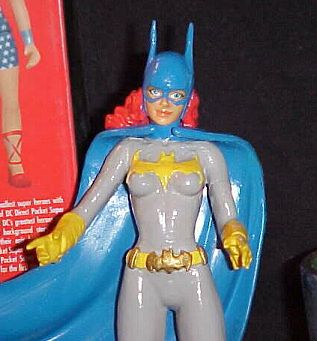