Hasbro shocked all on-lookers at this year's Custom Con by unveiling a line of figures the license for which they no longer hold. As everyone (except apparently Hasbro) knows, the DC license changed hands from Hasbro to Mattel late last year. Oblivious to this fact, Hasbro unveiled a line of "Animated Universe" characters with the intention of filling some of the gaps in their many various lines. As we all stared on, not quite believing what we were seeing, the Hasbro rep began: 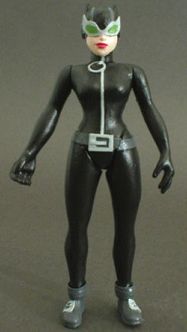 "Well, welcome everyone! As you all know, we are rather tyrannical when it comes to letting folks into our showrooms, so congratulations to those of you who were able to make it past the hounds... and the alligator pits. And, I'd like to pause a moment for the folks who... uh... lost the fight with the giant irradiated gorilla right at the end there...

"That was a new measure this year, and I'm happy to see that so many of you made it (editor's note: there were 4 of us there - out of the 78 that came that morning). Anyway, as you can see, after years of endless repaints, we started producing some new sculpts the past few years and including them in the various four packs. I'll admit that some of these were not our best work, in fact the mold for the "new Batgirl" was actually mauled by my cat right before it went into production which accounts for it utterly crappy looks and... uh... strike that."

At this point, the Hasbro rep came down from his fortified tower flanked by six armed guards (one of whom, incidentally, was apparently responsible for the new Poison Ivy "sculpt."), and walked over to the display area. 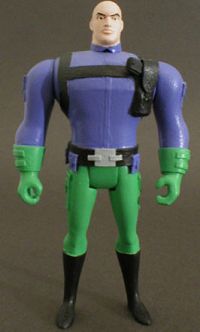 "As I was saying, these four packs did remarkably well at retail, and the higher ups (at this he gestured to a series of giant posters on the walls - which simply showed one giant face and the words "Big Brother is Watching") decided that we could really pull out the stops and spend some time and effort on some truly new and well done product. We're doing away with the four packs now that we've emptied the warehouses of the old sculpts, and going back to single carded figures. No more repaints, no more re-hashes of characters! We've got figures coming based on the Batman, Superman, Batman Beyond and Justice League cartoons! It's a new age of Animated figures!! We at Hasbro are simply the smartest most dominant company on the planet and..."

At this point, several of us had simply had enough and decided to pointed out that Hasbro no longer owned the rights to ANY of the DC universe characters.

We all decided that maybe this was a good time to leave, and so we went back through the irradiated gorilla room, the alligator pits the hounds. Thankfully most of them were quite full from the mornings frenzy and let us pass unhampered.

So, while Hasbro *thinks* they have some new animated product coming, you'll never actually see it at retail.