This year Toy Biz, instead of putting their own neck out on the line, has decided to produce obscure characters by contracting outside labor. The whole process will be produced out-of-house, so it's all in the hands of the contracted company, with the profits being split 98/2. Who's fool enough to take this low a percentage? Enter Wicked-Force Productions...

"The main reason I wanted to do this project is because of my love of Agent X and his cast" said W-F CEO and President RoboKillah. "I just had to do it. If I didn't who would? Well, besides that Mattman fella..." 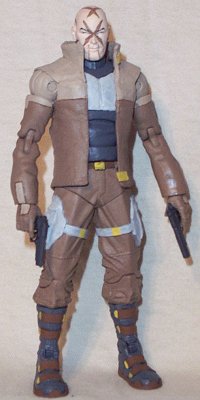 "The line is called "Not Quite Legends" for two reasons" Robo added. "Firstly, the characters produced under this logo haven't quite achieved legendary status in the Marvel Universe. These are the new guys, the obscure guys, the guys readers laugh at and with. Secondly, they will be mostly in scale with the regular Marvel Legends, but we've traded some of the articulation for appearance. Plus, I'm lazy."

"Since these are being produced by me exclusively, and Toy Biz knowing my reputation, these will actually be chase figures. They will be packed 1 in every 92,643 cases. This goes back to my production speed, which means I'll probably get 2 figures done before the end of the year. I can't wait to see what these will go for on E-Bay!"

"Vice-President Thorman will be doing the packaging and logo designs, while I will be doing the sculpting and painting. This means there will probably be variants, like when I run out of a color or Thorman's printer goes ballistic. I'm really excited about all of this though, especially getting to meet with fans of comics and action figure collectors. They always have such nice things to say. We also hope to keep the line running for as long as possible. We definitely want to finish out the Agent X cast and move onto other projects."