Iron Man - repainted Stealth Armor Iron Man. Used milliput to lengthen the arms and legs to be in scale

Hercules - body is Zangief from Streetfighter vs X-Men. Head modified with milliput. Harness is belt from 2 Zangiefs.

Box - Made from X-Men Classic Light Up Juggernaut, head is helmet from Electro Spark Spiderman modified with milliput 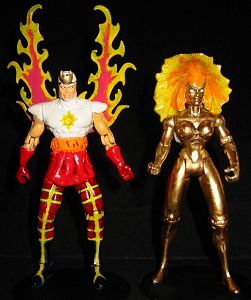 Gamora - base figure is Psylocke, milliput skulls and belt. Loincloth is from White Queen's staff, knives are from Evil Ernie

Moondragon - base figure is Morrigan from Darkstalkers. Cape is from JLA Martian Manhunter. I had to draw in her costume webbing with a permanent marker