Ilia was made from a Star Trek: The Motion Picture Uhura body with a TMP Ilia head. The blue is close to the TMP Spock's blue, but I wish it were a little closer.

Lore was originally supposed to be an easy straight repaint of the body of Cadet LaForge with the head of Data. I ended up not being satisfied with the body after seeing some screen captures fro Descent, so I sculpted on shoulder pads, a collar, and chest pads. 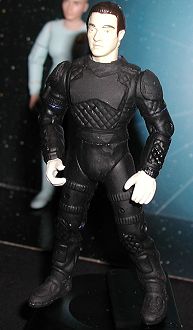 Commander Chapel was the body of a Saavik figure with the head of a Lwaxana figure. I did repaint the collar, wrist rank and shoulder rank.

The Federation President was my second attempt at the character. My first used the same recipe, but was more of just a repaint as far as the body was concerned. The figure was originally a Soran from Generations. I sculpted on the hair, neck-wear, belt buckle and bottom part of the coat. I added the same texture to the coat bottom by using a toothpick to make many horizontal folds.

Uhura was the body of a Saavik figure with the head of a TMP Uhura figure. I did repaint the collar, wrist rank, shoulder rank and hands.