I have been very impressed with Batman Beyond. While I agree with everyone that it is sad to see an institution such as the current day Batman cartoon end (at least for the time being), Batman Beyond is a suitable successor to the franchise. A lot of people complained about the show. It is good if you look at it without feeling like you've been cheated because Batman and Superman are gone. At any rate, here are my figures that are based on the show. I have planned many more. 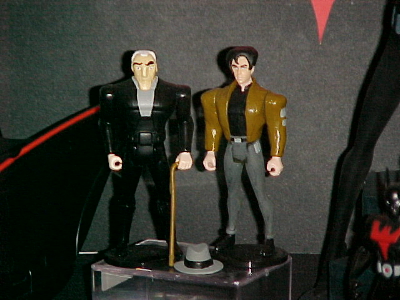 Bruce Wayne was made from a New Batman Adventures (TNBA) Undercover Bruce Wayne body. The head is an original sculpt from Sculpey Premo. The cane was a Q-Tip with the swabs removed and an appropriate bend added.

Terry's body came from a TNBA Nightwing. The head formerly belonged to a Resident Evil 2 Leon Kennedy. The hair, jacket, belt buckle, neck, and pant cuffs are all Sculpey. Just a note, I chose the Leon Kennedy head before Power Armor Batman was announced and released. 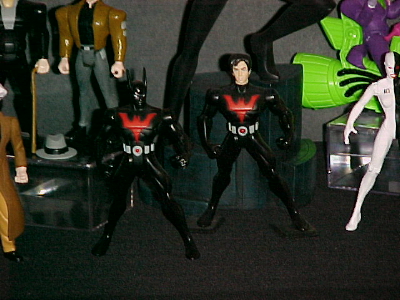 The Batman figure on the left is simply a repaint of the Batman Beyond Future Knight Batman.

Terry McGinnis' body is the same figure. The head is a Leon Kennedy from Resident Evil 2 to remain consistent with the Terry in civilian garb.

Commissioner Gordon's body once belonged to Machine Gun Joker. The head is from a Toy Biz Dagger from the Cloak and Dagger 2-pack. The hair, neck and chest/shirt were all sculpted from Sculpey. Her glasses were cut from a blister pack and were glued into place. 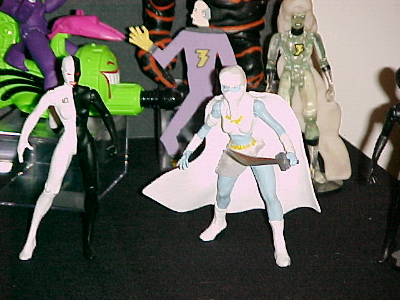 Curare was made from a Savage Land Storm. After Dremelling away the parts that should have been in the way, I added the armbands, boots, and hood with Sculpey Premo. The skirt was at one time Sculpey, but the hip articulation cracked the hardened Sculpey and I opted to instead cut a cloth skirt from a fabric remnant. The sword was from me parts box. The cape came from a Superman Steel figure.

Ten was made from a Toy Biz Cloak and Dagger 2-pack Dagger. I removed the hair, sanded away the excess glue and her remaining ear and painted. 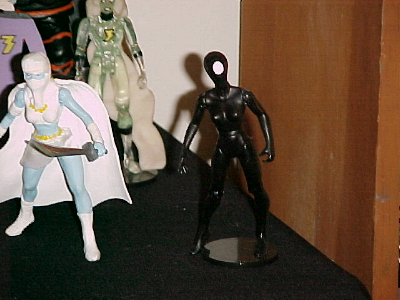 Inque was made from a Dagger from the Toy Biz Cloak and Dagger 2-pack I removed the head and sculpted on a new one. I have some Sculpey Flex and intend to make some interchangeable limbs for her. 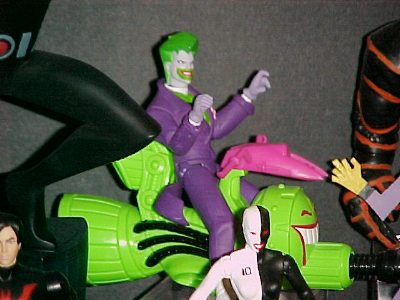 J-Man is a repainted Jokerz leader figure. Not much else to say here. 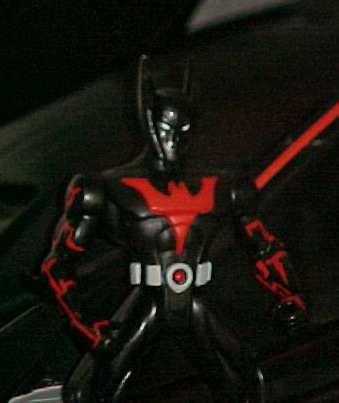 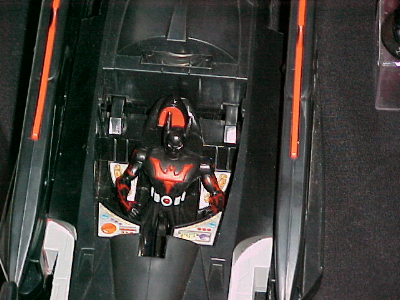 Batmobile Pilot Batman is basically a repainted Future Knight Batman. I painted the circuitry on his arms and tried to make a better set of ears. It only kind of half way worked. They look different, but not quite right yet. I also repainted the red parts on the Batmobile to more accurately reflect the car's look on the show. 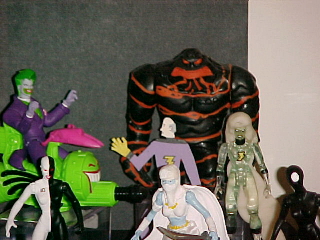 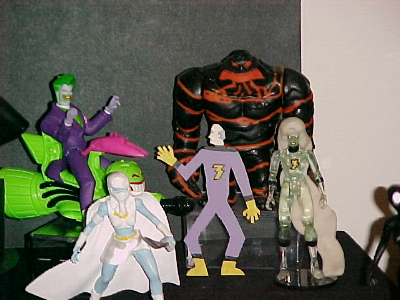 Magma was made from a Batman: Rogue's Gallery Clayface. His left hand is my first and last effort with Das Pronto. Freon was made from a Fantastic Four Invisible Woman. Her hair was made from translucent Sculpey. I achieved a 2-tone effect by covering her entire body with liquid masking. I cut the masking off of the gloves and boots and was very happy with the results. The 2-D Man was cut from sheet styrene and painted. Overall, I was very pleased with the Trio.

This is where Colin's figures end, and Tim's begin.

Victor Fries was made from a gold TNBA Nightwing figure, with the head from a TNBA Mr. Freeze. The packaging insert was printed out, then copied onto a transparency at Kinko's.

I designed the packaging for the Royal Flush Gang on my computer. The actual box is from the TNBA Super heroes vs. Super villians 4-pack.

Here's the back of the packaging. The picture was taken from an issue of Wizard.

King was made from a TNBA Batman figure, with the head from a STAS Superman. I dremelled most of the details off, and then smoothed out the belt, added the crown and red part on the neck with Super Sculpey.

Queen was a Harley Quinn figure. I dremelled off the details, then added her hat and shoulder-pads with Sculpey. The tassel is cut off some random cape.

Ace is, naturally, a dremelled down Bane, but with a dremelled TNBA Bats head. The Spade was added with a Sharpie.

Ten was actually a Phantasm figure. Her dremelling took awhile, but I wanted her to be shorter than her mother, like she was in the cartoon.

Jack was a Nightwing figure. I dremelled off the parts of Nightwing's bird that would show. I cut and dremelled a cape from one of the Knightfall (or Knightend or something like that) Batman figure until I got it to look like I wanted. The belt, nose, extra hair and crown were all added with Super Sculpey. The tassel is, again, part of a cape. Though you can't see them, his wrist bands actually have the daggers painted on them.