Finally Hasbro, DC Direct, and ToyBiz have teamed up to bring the fans what they've wanted for years. A line of super-articulated, super-detailed, Extreme action figures based on their favorite Comic Book Heroes. A top Hasbro exec. was quoted as saying "Aww, heck with the money, we've got money coming out the wazoo. We just wanted to make a cool line of figures that the fans would love." Soon after a DC Direct exec was quoted as saying "Umm, yeah, duh!"

The initial line slated for late July 2001 release features a series of 6-7 in figure Two-Packs, with one deluxe two-pack. The line includes the following figure packs: 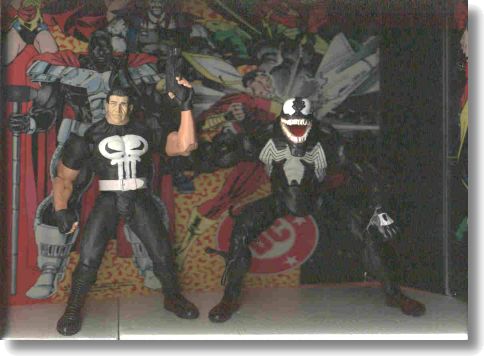 Anti-Heroes: Includes multi-jointed Venom and Punisher with sub-machine gun. (There is talk that the Punisher figure will ultimately ship with a leather trench coat.)

Rookies and Veterans: Features Nightwing and his predecessor Robin. Both in there modern costumes and hyper articulated.

Thunder and Lightning: This set features Thor and The Flash. Again, both feature multiple points of articulation and of couse Thor comes with hammer.

Style Clash: This is one of the more unique sets. This will be a reoccuring theme pack in the series. The set features two figues in the same scale and with multiple points of articulation, however they will have very different artistic styles. The initial set features and Animated style Batman and a Futuristic style "2050" Daredevil. Batman features a ball jointed head and Daredevil 2050 comes with "photon-billy club."

Eternal Legends Deluxe Boxed set: This set features the Ultimate Comic Legends from both major universes, Superman and Captain America. What makes this set special is that the set also comes with Cap's "Turbo Cycle." Of course, both figues also include multiple points of articulation, and Cap also comes with shield and American flag.

This reporter is very excited about this line and I certainly hope we see more Comic Book Legends: Extreme Action figures soon. However, I certainly hope that by the time production starts on these figures that they change the name. The word "Extreme" and its over usage is getting old.