When Miked Limited released its plans to display its Hellfire Club line many fans were X-tatic.

Here's the X-Clusive pics of the Hellfire Club line.

When interviewed, the spokesperson for Miked Limited exclaimed "It's going to be great! And these are only the first wave of figures!" Toybiz losing their rights to the Marvel license was a great thing for collectors. Miked Limited is "fully aware of collectors" and plan to base the future series on what collectors want. Scott Reeves, CustomCon reporter, put in a call to Mike Dee, president of Miked Limited. He said, "We wanted figures that were obscure, obscure to the point that they might even be a deceased character. Myself I prefer articulation, however, I like to hide the articulation as you will see with our up and coming Sauron figure." Mike also had this to say:

"We knew we needed to do something grand. And, well, the Hellfire Club, in my opinion, was it. A line based the misconstrued."

SR- "So what made you choose to do Selene, Pearce, Magma, Firestar, Catseye, and Beef?"

MD- "Well, there are so many characters related to the Hellfire Club. I didn't want to just do the inner circle or just the hellions. I like big lines, not many short lines, It leaves you a wide variety of choices. But specifically, Selene is a great villain, and I've always been a fan of predominant female figures. Firestar because she's now a good guy, started off as Emma Frost's personal assassin and now she's an Avenger! The others are interesting characters in their own right, and play an important role in completing a group or sub group of the HFC."

MD- "Heh, well not really but I'll tell you this, only one Wolverine, and he is included in a box set."

SR- "What is your dream line of Marvel figures?" 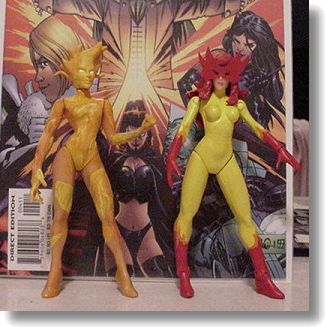 MD- "He was the villain in one of my first comics. It was the seventies! [he laughs]

So there you have it, exclusive pics and an interview from Miked Limited! It looks like it will be an awesome year from Marvel figures.