Toy Biz once again shows it's commitment to collectors with this new assortment of the fans least wanted characters. The assortment includes: Angar the Screamer, The Grinder, The Hypno Hustler, Man-Elephant, M.O.D.A.M., The Orb and the White Rabbit as well as a Spider-Mobile and Bombastic Bag-Man boxed set. We caught up with sculptor Matt Lind and asked him about the line.

ML: The higher ups at TB decided that since everyone out there was gonna whine and complain about everything they did no matter how well done it was that they'd give them the stuff they wanted the least. That way, whenever they go back to doing characters people actually have heard of they'll be champing at the bit to get 'em and likely won't complain even if they suck. I for one was thrilled to do the line though. I just love these characters. Obscure, crappy villains have always been an obsession of mine and I'm glad that at least some of them will make it to store shelves. Sure, they'll probably hit the 3 for 10 bins in record time but who cares. Still, it wasn't an easy project. Just finding reference material was a major pain. I get just a bit misty eyed when I imagine all those poor interns crawling on their hands and knees digging through 25 cent bins in vain. we couldn't even find the original appearances of some of these characters they're so obscure. You'll notice that the line up is 7 figures at this point, which is 2 more than the Toy Biz standard, what this means is that 2 will either get held back or canned altogether. I for one am betting on 'em getting canned, oh, and rest assured, the canned one will be the one you want the most. Sorry. 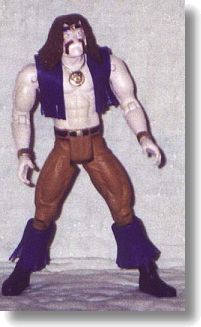 The Grinder
First Appearance: Spider Woman #26
The Grinder's head blades will spin at the flick of a wheel in his back.

Man-Elephant
First (and only) Appearance: Savage She-Hulk #17
Man-Elephant will have removable tusks that retract back into the head at the touch of a button.

The Orb
First Appearance: Marvel Team Up #15 A longtime Ghost Rider nemesis, The Orb features a light up helmet eye.

The White Rabbit
First Appearance: Marvel Team Up #131
Archenemy of the Fabulous Frog-Man as well as the Grizzly/Gibbon team, White Rabbit comes with a spring loaded umbrella that fires carrots.

Spider-Mobile/Bombastic Bag-Man boxed set
First Appearance: Amazing Spider-Man #130 , and Amazing Spider-Man #259 respectively. The Spider-Mobile will include a light up Spider-Signal and a sound chip of Spidey saying "Terrific. It's getting so a guy can't even drive his Spider-Mobile in peace anymore in this town." and "After a stunt like that, I feel just like Steve McQueen." Bag-Man has a removable mask made of real paper.