The Bandai booth had a surprise showing of new and old product based on the cult anime Neon Genesis Evangelion, known as ShinSeiki Evangelion in Japan. The recent Kaiyodo and Banpresto items have been very popular with collectors, so it's only natural that the line should expand.

The new Banpresto gumball items include new waves of Super Deformed figures, a follow up to the sets featuring Asuka and Rei sets, which have had strong pre-orders, according to various import stores online.

The 2 new sets will be divided into "ANGELS", featuring more of the popular enemies of the NERV Evas, including some which have never seen figure form before, and "EVE", which features the lovely ladies of the anime series. There is also a light-hearted inclusion of IKARI SHINJI, the main protagonist of the anime, in one of his female companion's plugsuit. I guess that qualifies him as a "female", in some odd way.

The break downs are as follows:

There will also be chase figures. A transparent version of each character is to be distributed randomly in an approximate ratio of 1:50. Judging from previous scarce Evangelion items these will be highly sought after as collectibles in the years to come. 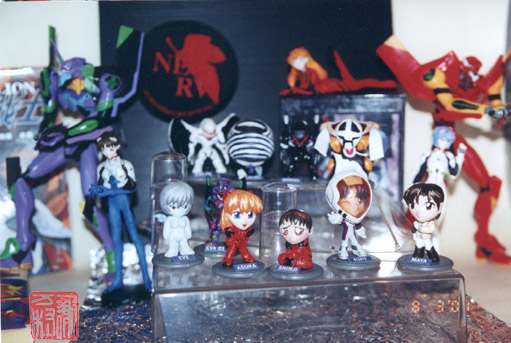