After only just under two years on the air, the TV series Roswell (Roswell High to non-American viewers) has a series of action figures based around it.

These figures are being produced by Toy Biz, (famous for their Marvel Comics creations) following the success of the X-Men Movie Line. 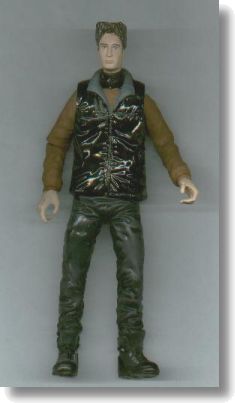 Other lead characters such as Mx, Tess, Sheriff Valenti, Maria and Alex are already planned for waves two and three, along with Agent Tapolsky, Nesado and Liz in casual clothes.

Each of these wave one figures comes individually carded with a stylish Roswell design, complete with accessories. Each figure possesses multiple points of articulation.

Michael and Isabel are also being released as a short run twin pack, together on a desert display base, signifying how their relationship began with the dreams in the season one episode "Four Square."