Must See TV has now expanded to include MUST HAVE ACTION FIGURES with the launch of the new "TV MANIACS" line of figures. And what is better for the inaugural line than an inauguration?!?

That's right Aaron Sorkin's Award Winning series "The West Wing" now expands to 3D Plastic! Now you can reenact episodes or create your own "further adventures" of the Bartlet Administration. 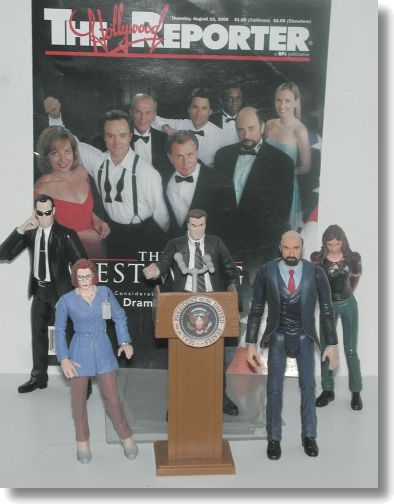 The first wave of figures will consist of one 2 pack, 2 single carded figures and an exclusive mail away figure! 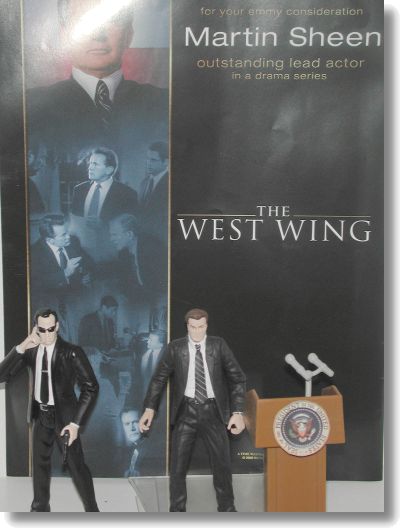 First up we have the President Josiah (Jeb) Bartlet 2 pack. President Bartlet has 7 points of articulation and accessories include a stack of Rare books, reading glasses, and a commemorative ink pen (just like Bartlet uses to sign important documents and bills into laws)! And, just like President Bartlet, this figure doesn't go anywhere without a Secret Service Escort. The Secret Service Agent comes with an earpiece, Radio and sidearm with 10 points of articulation.

Next up we have White House Communications Director Toby Ziegler. Toby has a wry sense of humor and 12 points of articulation. He comes with and over stuffed briefcase and a removable overcoat. 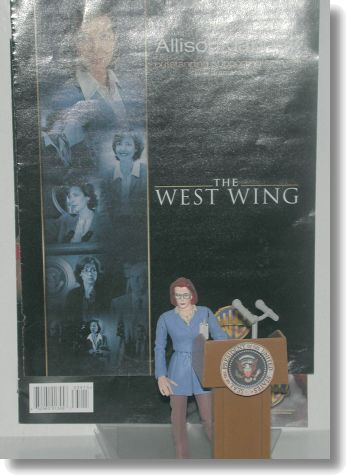 Finally we have the White House Press Secretary CJ Cregg. CJ has 7 points of articulation and comes with reading glasses, podium, goldfish bowl and sensible shoes for walking quickly though the hallways of the white house.

As the season draws to a close and reruns threaten to engulf us, we will be offering a special exclusive Mail-away figure for the line. Zoe Bartlet the President's daughter will ONLY be offered through this offer for a limited time!! Codename: Bookbag has 10 points of articulation and comes with overcoat, backpack and a book about what life was like 100 years ago.

This show has won just about every award a TV show can win and now you can bring the cast home with you! Be on the look out for future Waves!!