This Dr. Who line is by Matt Cauley.

The First Doctor uses a reworked Elijah Snow for the base, The head is retooled from a Dr. Evil headsculpt.

The Second Doctor also uses a modified Elijah Snow for its base, but this time the head is a retooled Captain Jean-Luc Picard. All surface detailing was created with either clear vinyl or Kneadatite.

The Third Doctor uses a reworked Carnaby Street Austin Powers Torso with a Movie Maniacs Shaft figure donating the right arm and legs. The headsculpt is temporary, but this version is reworked from a DC Direct Elijah Snow using Kneadatite for the hair. 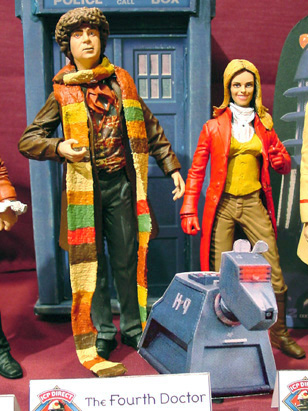 The Fourth Doctor began as a Movie Maniacs Shaft figure, but has arms from a Michael Myers figure and a reworked head from one of the McFarlane Bob & Doug McKenzie Brothers. The scarf is created from Rigid-Wrap. The McKenzie Brothers also donated part of their jacket to serve as the Doctor's vest.
Romana II has a reworked Ichabod Crane torso with legs from the Metal Gear Revolver Ocelet figure. Ichabod donated his boots as well. The headsculpt began as an Austin Powers Vanessa Kinsington, but was reworked to match the likeness of Lalla Ward. All surface detailing was created with either clear vinyl or Kneadatite. 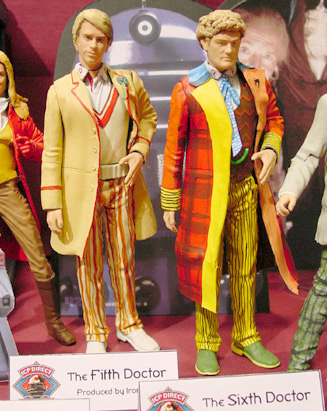 The Fifth and Sixth Doctors

The Fifth and Sixth Doctors both use a Movie Maniacs Shaft figure as a base. The Fifth Doctor has a modified Austin Powers Scott Evil head to capture the likeness of Peter Davidson. The Sixth Doctor uses a head reworked from a Deep Space Nine Miles O'Brien. All surface detailing was created with either clear vinyl or Kneadatite. 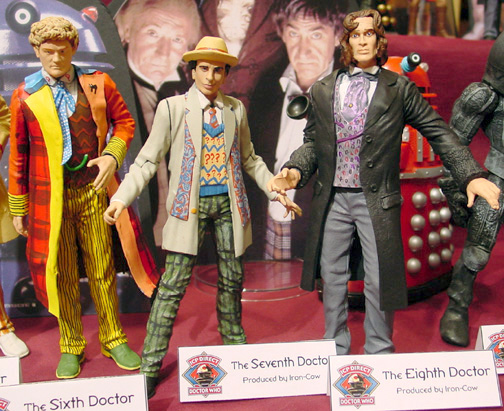 The Sixth, Seventh, and Eighth Doctors

The Seventh Doctor is a heavily reworked Angel figure from the original Buffy the Vampire Slayer line. The head is a reworked Austin Powers Dr. Evil sculpt. All the clothing sculpts were created with Kneadatite.

The Eighth Doctor began as a Movie Maniacs Candyman figure. The head comes from a McFarlane Crow figure. The chest is an original sculpt, created from Kneadatite and vinyl. The jacket had maybe 30% of its original material removed to allow for a better fit. 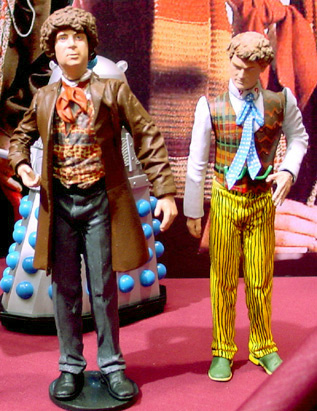 The Fourth Doctor is shown here without his scarf. The Sixth Doctor has his jacket removed. Both were shown as such so that viewers might appreciate the amount of detailing that went into the paint applications for these figures. 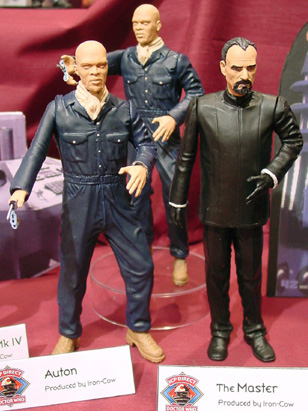 The Auton 2-Pack and the Master

The Autons are reworked Movie Maniacs Michael Myers Halloween figures with arms and a headsculpt from a McFarlane Shaft figure. The Master has Shaft arms and legs, a Doctor Evil torso, and a reworked head from a Jean-Luc Picard.

The History of the Cybermen 3-Pack

The Mk I Cyberman (center) is reworked from a McFarlane Anime Kaneda figure. The Mk II Cyberman (left) is adapted from a Movie Maniacs Michael Myers Halloween figure. The Mk IV Cyberman (right) is modified from a McFarlane T-1000 Terminator figure. All three headsculpts and chest ventilators are original Iron-Cow Prod sculpts, created from Kneadatite, styrene, and various plastic kit-bashed parts. Clear vinyl was used on all three for further detailing.

The Sontarans use a reworked Toy Biz Lord of the Rings Newborn Lurtz for their base figures. The helmet is created from a plastic Easter Egg and all other sculpted details were created with clear vinyl and Kneadatite.

The TARDIS was first created digitally in Photoshop as an adaptation of the "Make Your Own TARDIS" from the Doctor Who technical manual. The files were outputted to paper which were adhered to Bristol and foam core. The two TARDIS consoles are photos outputted to paper and mounted on foamcore until the actual product is produced.