Lucky for us fans, the toys at CustomCon are not ones limited to the general market, but include exclusive lines!  Our photographers were fortunate enough to take these photos of Hasbro's next wave of KayBeeToy's exclusive JLA line.  This next wave appears to feature characters from the Justice Leagues past, with characters that featured prominently in the 80's and early-to-mid 90's.  Best of all, JLA fans prayers have been answered by not just one but TWO new female characters, plus the greatest Green Lantern of all, Hal Jordan.

Maxima comes in the purple and gold uniform that she is best known for. She stands about 1/2 a head taller than the standard male characters (in heels) and features 5 points of articulation: neck, shoulders, and legs.

Dr. Fate II is the Linda Strauss version that was introduced in the Giffen/DeMatteis days. An interesting choice to include such an obscure character, but given the male character's inclusion in the DC Direct line, Hasbro decide to go with this version instead. She features a removable cape and her right hand is in "spell-casting position". This figure is a dramatic departure from the immovable sculpts of the past as it features 11 points of articulation: neck, shoulders, elbows, legs, knees, and ankles!

Nuklon is the biggest figure to appear in the JLA line thus far, equaled only by the Despero figure from the Total Justice line. The sculpt is modeled after his post Zero Hour appearance. Although you can't see it from our photo, the sculpted mohawk really is cool as it dangles about 1/3 down his back without hindering the neck movement. Similar to Dr. Fate, he features 9 points of articulation: neck, shoulders, legs, knees, and ankles.

Here he is folks, Hal Jordan as green Lantern! This one seems to be a hodge podge of other molds, as we can recognize pre existing parts from the shorthaired Superman, Aquaman, and even TJ Black Lightning! He features the traditional 5 points of articulation that we have come to love with the JLA line: neck, shoulders, and legs.

The Red Tornado figure represents his JLoA days in the 80s rather than the current Young Justice version that is rumored to be included in JLA Series 4. The cape is removeable, and is the same as was used for Martian Manhunter (minus the buttons). Everything but the head looks like it is a variation on the Superman mold. Once again, he features 5 points of articulation: neck, shoulders, and legs. 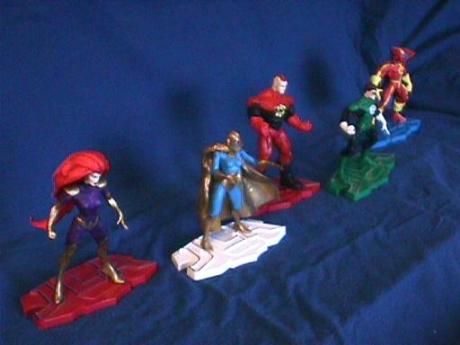