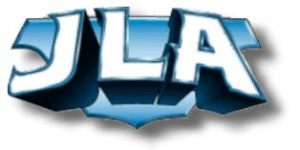 These figures were made by Calvin Uzelmeier. 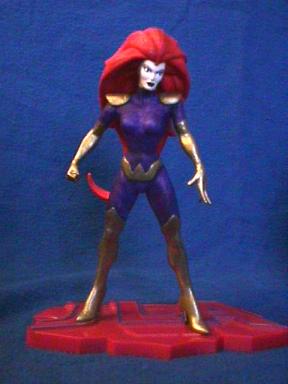 Maxima comes from a recipe by Joe Acevedo. The base is Storm from the X-Men: Robot Fighters line. First I removed the hair by prying it off with a screwdriver. Then I cut the earrings off and sanded down the rough spots. I used the dremel to sand down the glove cuffs, the creases around the upper arms and shoulders, and the line around her midsection. I used Magic Sculpt to even out the top of the boots with the rest of the boot, and sculpted the shoulder pads from scratch. The final piece was adding the triangle to the top of the belt (Magic Sculpt).

I primed and painted the body and hair separate, then glued the hair back on prior to spray sealing everything. The gold is actually gold paint as the first few coats (until it looked uniform), and then I added a coat using a gold pottery paint. It really bought out the shine! A black wash for the hair, and that was it. 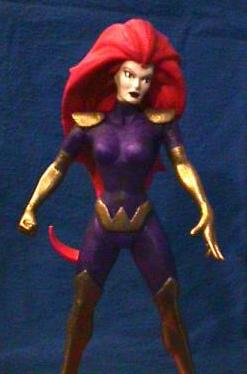 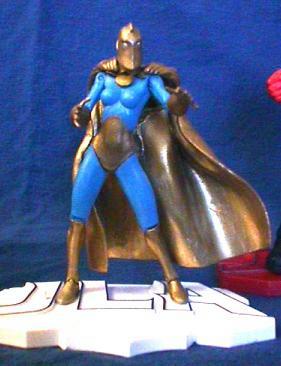 The base for Dr. Fate II is a MC2 Spidergirl. The helmet is from a Super Powers Dr. Fate with significant dremeling of the neck to have it match. I actually cut the peg right off the Super Powers figure and glued it on the Spidergirl body to keep the articulation. The gauntlets are sculpted from Magic Sculpt and the collar is from a toothpaste tube. The cape is from JLA Superman. The amulet is just a button.

Painting was all done with acrylics, with a pottery gold brushed over the first gold to add an extra shine. 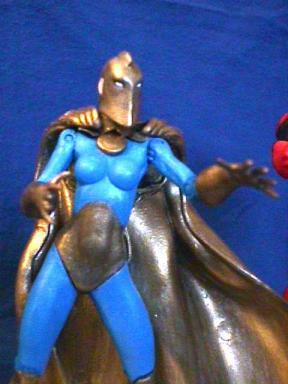 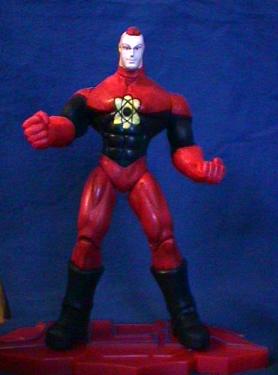 Nuklon took awhile to do. He started off as a Marvel vs Capcom Captain America, but when I saw the Avengers prototypes, I knew I wanted to use the Wonderman body. So I waited, and waited, and waited.... Before I did the head switch I had to remove the batteries from the back of Wonderman (a small panel held in w/ a phillips screw). Once Simon's head was out of the socket (boil & pop), I snipped the wires that connected through the head, and then inserted the Captain America head (with the peg trimmed down). The wings were cut from cap's head, and then Magic Sculpt was used to smooth out the lines of the mask and where the wings were. The belt, gloves and W on the chest were sanded down with a dremel, and the button on the waist was glued down. The hair on his head (for the mohawk) was sculpted from Magic Sculpt, with a small wire wrapped for the connecting piece between the top and the tail of the mohawk. The tail was cut from Zangeif's chest hair (X-Men vs Streetfighter), with the edges rounded off. 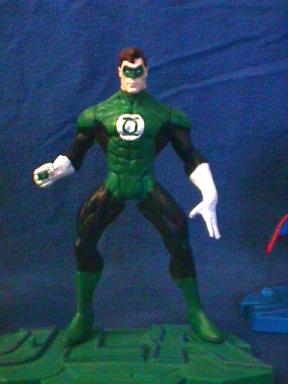 Hal Jordan is a variation on a basic Superman from the 2nd wave of the JLA line. The right arm was switched with that of a JLA Aquaman with the armor filled in with Magic Sculpt The left hand actually comes from a Total Justice Black Lightning and was added by cutting the original fist off at the wrist and then drilling hole into both the arm and new hand at the where a bone would be. A piece of paper clip was glued into the arm hole, and once dried, was glued into the hand. Magic Sculpt filled any open seems. The ring is from a JLA Green Lantern. 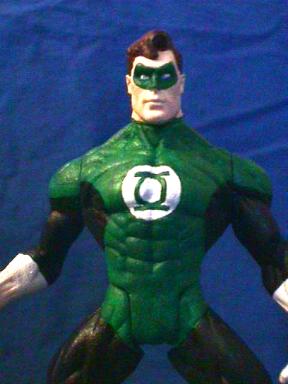 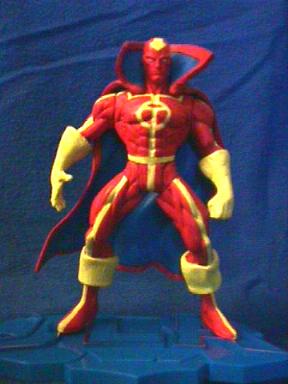 Red Tornado is a slight variation on a recipe by Bill Burns. The body is a TJ Superman, Dhalsim head from X-Men vs Streetfighter, and a JLA Martian Manhunter cape. Dhalsim's earrings had to be cut off, and the shoulders on superman were dremeled down to look more natural with the neck. The belt was also removed. The boot cuffs and gloves are Magic Sculpt. The yellow discs on the cape were cut off and rounded down.

This is the most difficult paint job I have ever done! The yellow went first, I then used a red marker to outline were the lines would be. I filled out the rest of the red, and then used a blue paint pen to outline the lines of the cape. A little more yellow to clean things up, and that's it! 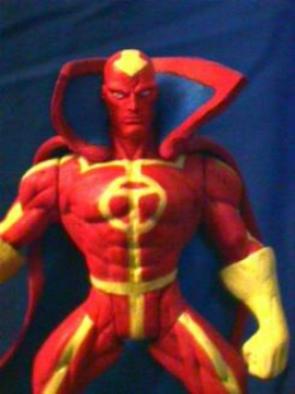