All of the Batman Beyond Wave 3 figures were made by Mark Myers.

The Batman of the past is made from a "Knight Assault Batman" which is a repaint of a "Detective Batman" with "Knight Glider Batman" legs. The cape comes courtesy of a "Gotham Defender Batman."

Batgirl uses the IRON COW Productions recipe with slight alterations. The recipe uses an Animated "Supergirl" torso and the upper legs of a "1959 Swimsuit Barbie" Happy Meal toy. An "Arctic Blast Robin" provides the boots, gloves, and upper cape. The boots were built up with Kneaditite and sanded smooth. Supergirl's hair was sanded down and a cowl was constructed. The ears and the bottom of the cape were provided by a "Wind Blitz Batgirl." The logo is courtesy of ICP. The belt is painted cut paper and the buckle is a painted package peg dot.

Robin is simply a repainted version of the "Robin with Assault Glider" that came in the TRU Alfred four pack that was released last year. He was repainted in darker shades to reflect his appearance in the movie Batman Beyond Return of the Joker. 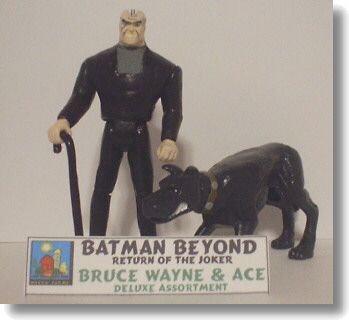 One of the most ambitious project taken on to date, the elderly Bruce Wayne was made using IRON COW Productions recipe for the same character, but only 50% of it. Bruce is a combination of a TNBA "Arkham Escape Two-Face" (TRU Repaint), an "Undercover Bruce Wayne", an "Arkham Assault Joker", and finally a Toy Biz "Batman" movie figure. To begin all figures were boiled and popped. Next, the Two-Face torso was put back together and details were sanded off. Once done the torso was cut in half at the waist. The same was the Undercover Bruce Wayne paying attention only to the belt since the rest would be cut away anyway. Once cut in half, the arms of both Two-face and Undercover Bruce Wayne was cut off near or at the elbow. The upper arms of Two-Face were placed back within the now sanded torso and the torso was glued back together. Once dry the lower arms from Undercover Bruce Wayne were attached at the elbow create Bruce's arms. To assemble the legs, the knee joints were literally cut out of the Toy Biz Batman's legs. The same size area was removed from the Arkham Assault Joker's legs and the knee joints were fitted into place. Any gaps were filled in with Kneaditite then the legs were sanded smooth. Once completed the legs were positioned in the lower part of the Undercover Bruce Wayne's torso, which had been cut in half earlier. The lower torso was closed and glued paying special attention not to let glue seep into the legs joints. To attach the upper and lower torso's together Kneaditite was used. Once it had had time to set, Kneaditite was one again used to smooth out the torso and arm seems. The shirt lines were also cut into the torso at this point. Once dry, brushed on Alumilite was used on the torso (around the shirt lines) and arms to create the effect of a jacket. After the body was constructed the head was cut at an angle to accommodate the positioning on the new torso. Later the hands were cut off and repositioned at an angle to hold his cane and to look like he could be at the Batcomputer talking to Batman. The head is an almost original sculpt from my previous attempt at an Old Bruce Wayne and is based on an Undercover Bruce Wayne head. The cane is Kneaditite and bits cut from the plastic that housed the firing disks from the Street to Sky Batmobile.

Ace started as the Ace figure, which came with the Batman Beyond "Neon Camo Batman"(dlx) figure. The molded armor was sanded off and the then hollowed-out Ace was filled with plaster. Once dry Ace was covered with Kneaditite and sanded smooth. The collar is cut painted paper and package peg dots. 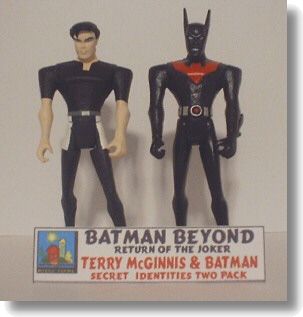 Terry McGinnis is based on the recipe for IRON COW Production's Vigilante Terry, which in turn was based on Pierre's recipe for a Terry McGinnis without a Jacket. The recipe was copied once again substituting a "Rumble Ready Riddler"figure for the Nightwing body. The recipe uses the Head of a "Power Armor Batman" (Terry McGinnis head, minus the neck peg) and the body of a Rumble Ready Riddler with hands from a "Grad Prix Speed Racer" figure. The Riddler logo was sanded completely off and then the figures head was removed. The hands were removed and replaced with those of the Speed Racer, the Riddler head was separated from the neck peg and replaced with Terry's. The head/neck peg was replaced inside the figure. Kneaditite was used to create Terry's shoes and pants. The belt is cut painted paper.

Batman was constructed using the same recipe as the Terry McGinnis substituting the head and hands of a "Manta Racer Batman." The arm fins and belt buckle were recast from the "Power Cape Batman" figure and the remaining belt details as well as the Batlogo are cut painted card stock. The boot details are made from Kneaditite. The feet are actually cut out to resemble the boots of the Batsuit. 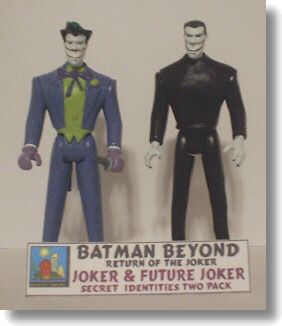 Future Joker was a major undertaking. At first he was constructed quite simply using a "Rumble Ready Riddler" as the base with an "Arkham Assault Joker" head sanded down and repainted to reflect his appearance in the movie. This was quickly decided that it just didn't look right. It was decided that an "Arkham Assault Joker" torso and arms would be the best way to go. The upper legs and lower torso are from a TNBA Mr. Freeze, with the lower legs and feet of an "Undercover Bruce Wayne."The hands come from a Speed Racer "Assassin" figure. Joker's head was once again sanded down and repainted. It's not totally visible from the picture but the Joker's lips are actually a mix of red and black. His skin tone is a very washed out babyblue, unlike his teeth which are white.

The Joker is a repainted "Arkham Assault Joker" with the cumberbund sanded off and replaced with Kneaditite shirt details. He was repainted in the Future Joker color scheme with the red/black lips and washed-out babyblue skin tone. 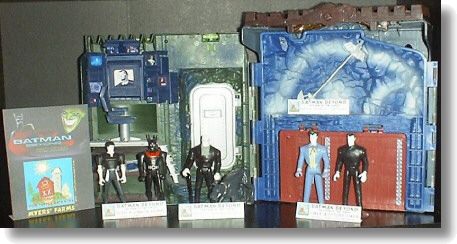 This is just the Batman Forever Wayne Manor/Batcave Playset. I just made all new decals for them. No paint required.

This is just the Ultimate Batcave from the Batman Forever line. Again, I just made all new decals for them. Still no paint required.