In a sudden shocking announcement, Hasbro has affirmed that plans to bring the much requested figures based on Batman Beyond: Return of the Joker to stores have been nixed.

In a special Customcon press conference, the following was revealed.

"It's not that we cannot afford to release the figures, neither is it a fear of lack of demand. And no, it's definately not because we *ahem* are run by monkeys. No. You see, we were committed to trying our best to push these things out, but the top powers that be have decreed that there's no point." In an official statement from the board of Directors, Hasbro has announced that "it is completely NOT worth our while to try to cater to DC fans. While there are some loyal fans we would like to thank, the majority of fanboys out there are whiney, complaining and never satisfied. We made a Mad hatter for them, we gave them an Alfred, and when no one wanted to sell them we did our best to push the 4th wave of JLA. But was that good enough? Nooooo! They still demanded that our fair company should be burned to the ground so that DC Direct can make Batman figures. Comments run rampant at the Raving Toy Maniac Buzzboard about *ahem* [Hasblow] and how we issue nothing but repaints. So, you want Return of the Joker figures? Well, Fig you, Mr fanboy! You ain't getting them, bwa-ha-ha-ha-ha!"

"Instead, you'll be getting... 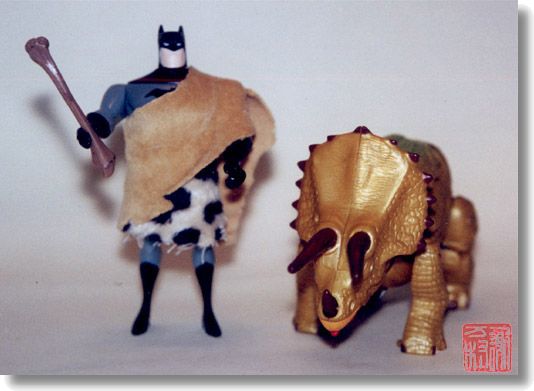 JURASSIC NEANDERTHAL BATMAN w/ ROBIN the triceratops wonder - The legend of Batman is beyond time! Even in the days of the caveman there is one who rises up to defend the weak and useless! The fearful visage of the bat, coupled with the primate like strength of his powerful muscles make him a feared opponent! If that wasn't enough, he also has his trusty Bat-ter-bone and ROBIN the potty-trained baby triceratops to aid him!

AVENGING ANGEL BATMAN - Even beyond the realm of humanity the Batman continues to fight for justice! Commissioned by HIM to exact retribution on those who have walked the wrong path, AVENGING ANGEL BATMAN is always watchful with his sound and light flashing eyes! And when evil is afoot, you can be sure he will soar like a bullet to defend humanity with his heavenly sword of morals and the unmatched power of his magical energy club!

Many...er, thanks to our photographer Darren.