Hasbro has announced plans to continue "BTAS: The Rogues," the classic BTAS-style figure line from last year devoted to the villains of Gotham City. "BTAS: The Rogues" continues to add long-awaited characters that were never made in the original line. As with last year's line, this year's will feature several new figures that never appeared on the animated series, but that have a significant place in Batman's history. In addition, this year's line will add a few villains from the series that weren't shown last year, and will also have a few more heroes. Consulting with producers Bruce Timm and Paul Dini, Hasbro has come up with a classic mix of villains from the comics and has weaved them into the BTAS universe as if they were there all along. This time, Timm and Dini take the storyline from the dynamic duo's beginnings to their ultimate parting of ways, and include villains from every part of their history together.

Starting off the second phase of this popular line is another two-pack of the dynamic duo, this time sporting their classic 1940's-1950's look. Batman and Robin each come with two Batarangs.

The Demon's Head is finally done justice! Batman's oldest enemy is represented the way he should be, in a suit, tie, and cloak. Ra's can finally get the respect he deserves! Ra's once again comes with his sword and Demon's Head mask. 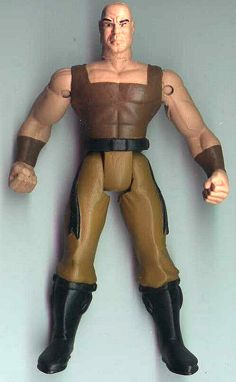 What would the Demon's Head be without his loyal servant? Slightly modified from his original appearance, Ubu comes to stand by his master. Ubu comes with a sword.

Harvey-Dent returns to the BTAS line to torture his longtime friend. This time he is represented in his Arkham Asylum coveralls. Two-Face comes with his coin and a revolver. 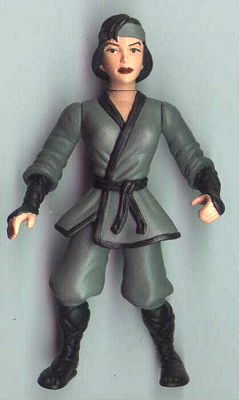 After hearing of Kyodai Ken's defeat at his hands, Shiva Woosan comes to challenge Gotham's greatest martial artist, who just happens to be the Dark Knight! Based on her appearance in the 1980's edition of Who's Who, Shiva comes with nunchuks and escrima sticks.

Finally, Batman has met his match! "Born" on the same night as Batman due to an action by his closest ally, the Dark Knight's opposite number comes to Gotham to get revenge on the man who stole his parents, James Gordon! This "player on the other side" comes with two pistols.