This Superman: The Animated Series line is by Randy Hayes. 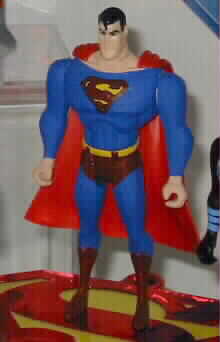 SUPERMAN: Superman was made from an STAS Superman torso & head, with TNBA Batman arms and legs. The Batman legs had to be sanded to fit in the Superman sockets, but the arm sockets were too big and had to be filled with Sculpey to allow the proper fit for the Batman arms. The STAS figure has a very round torso, but the design from the show is flatter, so I sanded the chest down to reflect that, and sanded of the extra rib details. I also sanded the shoulders down to round them out, in order to match the show's design. The s-shield is hand-painted.

LOIS LANE: Lois was made from the Hasbro Lois figure, but still needed some work. I resculpted the top part of the hair, and flattened out the face as well. I also replaced the hands with a BTAS Batgirl (right) and BTAS Poison Ivy (right). The rest is just a coat of paint.

BIG BARDA: Barda was made from a Hasbro Lois Lane figure, with TNBA Hydrojet Nightwing arms. The feet are from BTAS Batgirl. I flattened out Lois' face with Sculpey, and also sculpted the headdress from scratch. I also sanded the Lois figure's coat details off. I also sculpted the belt buckle, but the rest of the belt is just painted on. I was going to make her with Batgirl legs, and tried to make working joints so she'd be a bit more mobile, but the Lois torso wouldn't cooperate, so I switched back to the Lois legs. I cut off the longer portion of the skirt, making it match the STAS model sheet, and then painted the figure.

METRON: Metron was made from a TNBA Nightwing figure. The bird symbol was sanded off, as were the unnecessary hair and mask. Then I painted him, and that's it! 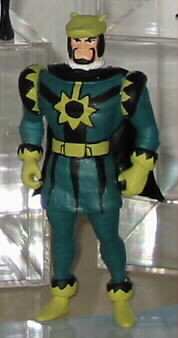 KANTO: Kanto was quite a bit of work. He was made from a BTAS Batman figure, with extraneous details sanded off, and the hat, hair, new gloves, sleeves, skirt, boots, etc., made from Sculpey. The "horns" on the hat were made from those wire twisties Hasbro uses to secure figures in their packaging. 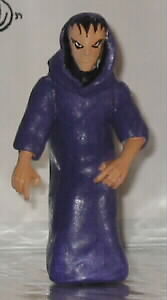 DESAAD: Desaad was a figure I started about 2 years ago, and finally got around to finishing. His body was sculpted largely from scratch, but his arm and head joints connect into a now-invisible TNBA Robin torso. The head is a TNBA Joker, sanded and re-sculpted, and the sleeves and hood were sculpted with Sculpey as well. His arms consist of (from the elbow up) TNBA Robin, and (from the elbow down) TNBA Commissioner Gordon.

LASHINA: Lashina was made from a BTAS Harley Quinn figure, with a BTAS Batgirl head. Sculpey was added for the mask and to reshape the mouth. I also smoothed over Harley's collar with Sculpey, and dremelled off her boot tops and wrist cuffs. The ponytail is cut plastic from an STAS Superman cape, as is her "lash" accessory.

LUMINUS: Luminus was made from a TNBA Riddler head, and the Nightwing from the Batcycle 2-pack. His legs were shortened, and all the armor from the Nightwing figure was dremelled off. 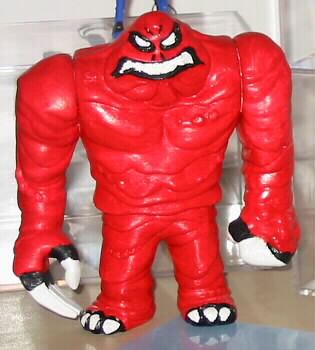 THE PRESERVER: This monstrosity came about because I was too sick of having 2 Clayface figures around. He was made from a BTAS Clayface, but not the regular one. This was the one from the TRU exclusive 4pack with Alfred. The thing was so ugly I had to repaint it. So I did. I actually like it better this way, even if it is off model. I got really tired of that tan color. 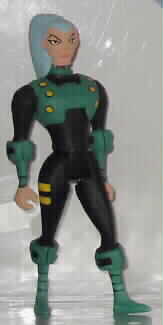 MALA: Mala was made from a TNBA Riddler figure. Yes, that's right, Riddler. I noticed his stance was quite effeminate, and since Mala is very large for a woman, it works. I added Sculpey for the hips and the armor. The head is the one from the Batcycle 2-pack Nightwing, but I sanded off the face, and sculpted Mala's anew. The ponytail is part of the TNBA Creeper's mane, with Sculpey added to round it out. 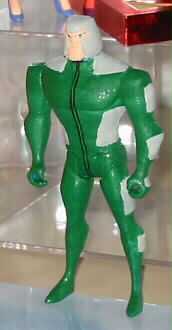 KRYPTONIAN SOLDIER: This guy was in the first part of Last Son of Krypton, the first Superman episode. I made him because I had a bunch of extra Batman figures. Basically, I dremelled off the excess "bat-points" and added the Kryptonian rectangles. The top ones on the arm and leg are made from Sculpey, as is the helmet. Other than that, the details are painted on.